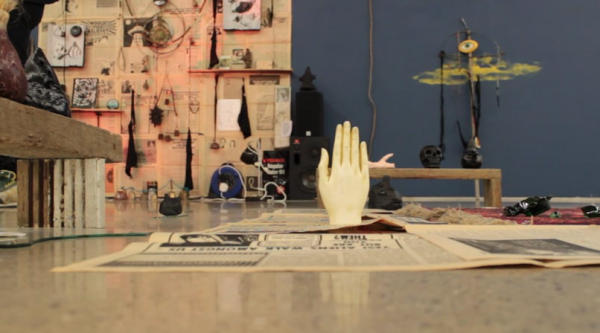 Written in Water, Shone in Stone, Lost in Light is comprised of work in various media – installation, painting, digital collage and audio, forming a constellation of thoughts and ideas that relate to perception and awareness. Richard Proffitt is interested in the transition between personally significant events and those that express aspects of a collective consciousness. In the written pieces that form part of Proffitt’s practice, he traces a process whereby thoughts and observations become recurring memories, replete with symbols and metaphorical meaning. Within his drawings, the natural world is transformed into a realm of psychedelic journey in which knots in the bark of a tree can take on a peculiar anthropomorphic appearance and mountains from afar can appear as towering deities.

There are numerous references to gateways, portals and paths, inferring a journey – a personal journey perhaps – or one towards expanding consciousness. In his installation particular materials are imbued with a certain power to act as potential talismans, esoteric objects that help to guide the way and to ward off evil. Proffitt’s work seeks out universally relatable symbols, ideas and attitudes which act as unifying forces within society. The audio aspect of the work forms an important part of the exhibition, encompassing elements of psychedelia, folk, drone and ambient music.

Proffitt considers symbols and allegories that cleave to the collective consciousness, he does this by referencing both myth and folk legends as well as their contemporary counterparts such as alien visitation and abduction narratives. This alludes to a phenomenon whereby popular culture is often assimilated and recounted as personal experience and vice-versa. Within Written in Water, Shone in Stone, Lost in Light, Proffitt works across a number of media, drawing on a wide variety of source material to create a body of work that considers the role of esoteric symbols in both personal and universal experience.

Written in Water, Shone in Stone, Lost in Light will be accompanied by a vinyl LP of 7 songs. The vinyl, titled Ending Time, will be available for purchase at the gallery; the limited edition features 180g vinyl, digital download code, poster, 12 page booklet featuring extra artwork alongside texts by Mary O’Halloran and Michael Hill and is limited to 50 copies. The regular edition features 180g vinyl and digital download code.