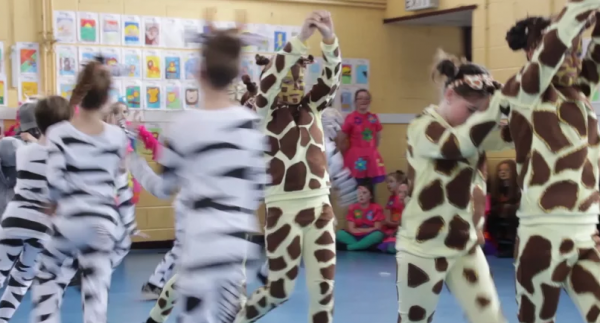 The Lion King Jr. will be St. Paul’s 5th musical production, which runs every 4 years and includes every child from 3rd – 6th class. Following 2013’s Alice in Wonderland, this year promises to be an even wilder affair with a full cast of lions, lionesses, hyenas, a large jungle ensemble and even larger show ensemble! In total 360 girls and boys are involved under the able direction of Rosemarie Meegan, choreographer Fiona Carroll and musical directors Jacinta McEvoy and Seánaí Conlon.

The Lion King Jr. tells the story of the epic adventures of a curious cub named Simba as he struggles to accept the responsibilities of adulthood and his destiny as king. Along the way, the young lion encounters a colourful cast of characters, including spunky lioness Nala, charismatic meerkat Timon and loveable warthog Pumbaa. To claim his rightful place on the throne and save his beloved Pridelands, Simba must find his inner strength and confront his wicked Uncle Scar. The Lion King Jr. features classic songs from the 1994 film, such as ‘Hakuna Matata’ and ‘Can You Feel The Love Tonight”.