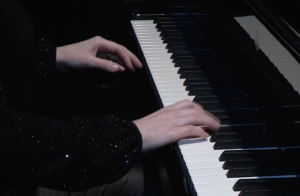 Dr Fionnuala Moynihan performing the complete cycle of Mozart’s Piano Sonatas in its entirety for the first time in Cork.

Fionnuala is widely acknowledged as one of Ireland’s leading pianists. She has a particular affinity with the works of both baroque and classical composers. In February 2009 she performed Bach’s Goldberg Variations to critical acclaim in the John Field Room of the National Concert Hall, Dublin and in November 2012 was invited by the prestigious Ardee Baroque Festival to perform both the Goldberg Variations and the Aria Variata in A minor. Fionnuala performed the Complete Piano Sonatas of Mozart in the Hugh Lane Gallery, Dublin, in a series of five recitals which ran from February to June 2010. She is the only pianist to have undertaken the formidable challenge of performing this cycle in its entirety in Ireland. In February 2014 she completed another monumental project – to jointly perform ‘The Complete Piano Sonatas of Haydn’, a series of twelve recitals over two years.

Fionnuala has been awarded many prizes both at home and abroad including a Bank of Ireland Millennium Scholarship, the prestigious Maura Teissier Bursary and the Rena Menasche Award from the Tel-Hai Piano Masterclass series held in Israel. She was awarded the John Field Prize at the 2009 AXA Dublin International Piano Competition.

Programme for Recital No. 1