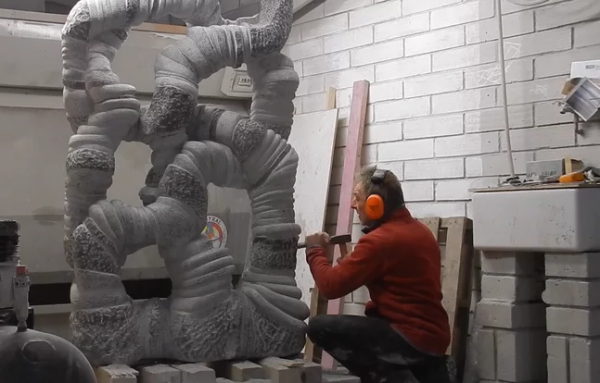 Exhibition statement: Working primarily with discarded limestone Cullen distils a series of large-scale organic structures that emerge directly from his involvement with the properties of the material. These material transactions take account of the fragmentary patterns and shapes that the artist sees as potential tendency within the stone. Through a process Cullen describes as ‘evolutionary’ the works complex structure is revealed slowly over long periods of time using a variety of techniques such as grinding, carving and the use of found cut-stone. Inspired by the work of ancient cultures, as well as the structures suggested by fractal geometry, the resulting works illicit patterns that operate across different scales and origins in the natural world and which are repeated with varying degrees of intensity and gesture throughout the exhibition.

Des Cullen is an artist currently living and working in Manorhamilton North Leitrim. Cullen studied sculpture at GMIT where he graduated with honours in 1996. He completed a First Class Honours Degree in painting in Sligo IT and an MFA at Ulster University in 2014. Cullen has work in major collections across Ireland and more recent projects include a solo exhibition at LSC 2010; Group Show at the platform Arts Belfast, 2012; First Prize Winner at ‘Sculpture in Context’, the Botanic Gardens in Dublin, 2014 and a solo show at the Cistercian Abby Boyle County Roscommon in 2014.