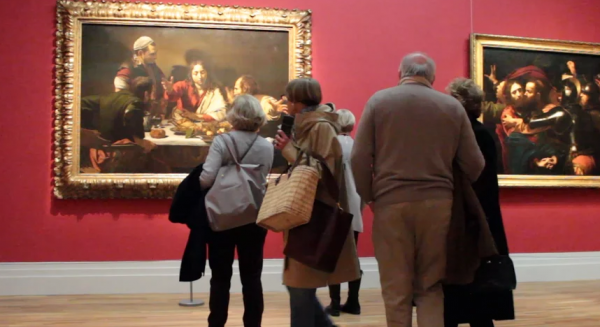 The highly anticipated exhibition Beyond Caravaggio opens in the National Gallery of Ireland on Saturday 11 February 2017. It brings together over 40 major works, including four master paintings by Michelangelo Merisi da Caravaggio (1571-1610), complemented by other significant masterpieces by his followers, the Caravaggisti. Many of the works in the show are on loan from private collections, and regional galleries, and this will, therefore, be a rare opportunity for visitors to see works not easily available to the public.

Ticket booking for the exhibition is through the Gallery’s website – here. All tickets include a free audio guide to the show.

Caravaggio is widely acknowledged as bringing a revolution to painting during the Baroque period with his dramatic use of light and uncompromising realism. His work had a long-lasting and wide-reaching influence across Europe. This exhibition will show the ways in which a large number of artists adopted Caravaggio’s ideas and developed them to become masters in their own right. Four major works by Caravaggio will take centre stage in the exhibition: The Supper at Emmaus, 1601 (National Gallery, London); The Taking of Christ, 1602 (National Gallery of Ireland), as well as two works never exhibited before in Ireland: Boy Bitten by a Lizard, 1594-95 (National Gallery, London) and Boy Peeling Fruit, c.1592 (The Royal Collection). Other important works by his followers include a number of French artists, such as Valentin de Boulogne’s Concert with Three Figures, Georges de la Tour’s Dice Players and Nicolas Regnier’s Saint Sebastian being tended by Saint Irene.

Adrian Le Harivel, co-curator of Beyond Caravaggio says: “This exhibition will bring together, for the first time in Dublin, thirty major artists who knew or were inspired by Caravaggio. It underlies the incredible impact that he had on painting at the time, whose ripples are still felt today.”