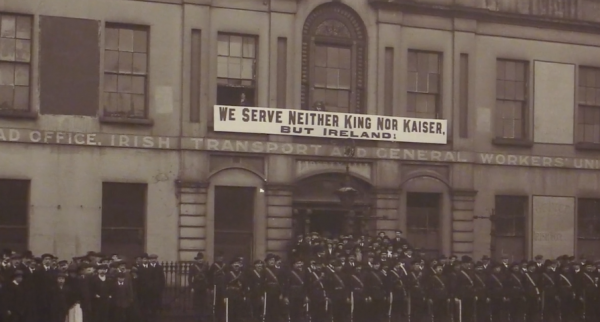 Rising is a major photographic exhibition which showcases the National Library’s rich imagery of the events and locations of 1916.

Rising draws on some of the most important collections of photographs at the National Library. It includes images from the Keogh Collection, the Independent Newspapers (Ireland) Collection and newly digitised photographs from the De Valera Collection, and various 1916 albums. It consists of 60 photographs, including a number of large scale photographs which emphasise the Rising’s impact on Dublin’s city centre. These images are enhanced by audio recordings of actors reading from selected letters and diaries detailing first-hand accounts of the Rising.

Who were the men and women affected by the Rising? How did Dublin look during Easter Week 1916, as fighting raged and buildings fell? What kind of landscape was left after the surrender?

Rising is free to visit, and is open seven days weekly: Monday to Saturday 10am to 5pm and 12noon to 5pm on Sundays.

The exhibition runs in the National Photographic Archive until the end of October 2016.