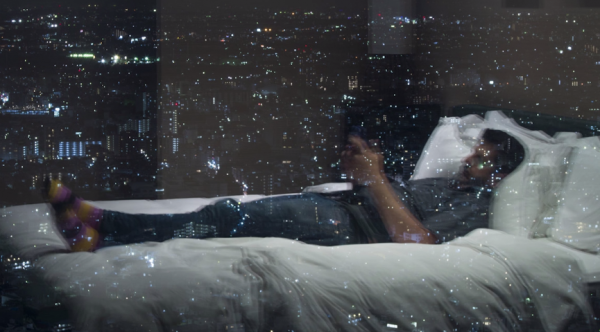 Soth has spent a significant part of two decades travelling around America, photographing quiet, strange, and offbeat corners of that vast country. Based in his home state of Minnesota, he studied at Sarah Lawrence College (under Joel Sternfeld for a time) and has since come to be regarded as one of the most significant figures in the world of contemporary photography. The works in Hypnagogia are drawn from several of the artist’s best-known series, including Songbook, Broken Manual, and Sleeping by the Mississippi; rather than being a simple collection of individual works, they are conceived as a form of narrative, with special emphasis on the relationship between the photographs. Geographically and chronologically disparate, the images that form Hypnagogia coalesce as a series of visions or dreams; the people in them have eyes closed or obscured, heads that are tilted back or turned away; one person stumbles, and another is suspended in mid-air. Anxiety and threat are suggested by dramatic waves, a tunnel, and a cave, but there are also awakenings, with glowing light and the promise of blue sky.

A key painting in Eoin Mc Hugh’s exhibition is titled ‘o-o-o-o da!’ and serves as a starting point for the artist’s ongoing exploration of the psychology of imagery. By reverting to elemental aspects of object recognition, such as light, shade, colour and form, he unsettles our modes of understanding and responding to what we see. Previous shows by the artist have included a variety of paintings, sculptures, and found objects, focused on the decay and chaos of the natural world. Here, in the four paintings that make up this exhibition, he has brought his attention to bear closely on the division and elision between abstraction and realism, idea and form.

Exhibitions from August 5 to September 21, 2016 at Douglas Hyde Gallery