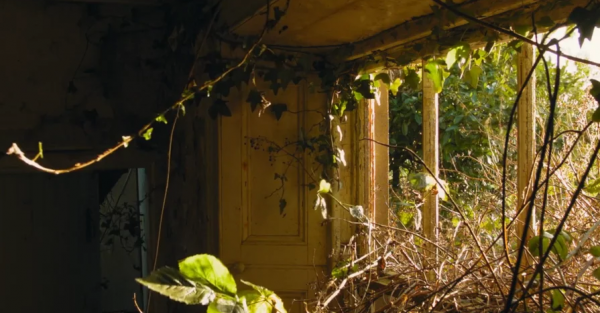 Maeve McCarthy is known for her small scale rural nighttime landscapes executed in tempera and oils on traditional gesso panels, with ideas of place and home, leaving, longing and returning. Exploring memory, childhood and loss, she now changes scale with six large atmospheric charcoal drawings accompanied by a collaborative short film. The starting point is a return to Glenageary, Co Dublin and the tending of her late mother’s garden, along with memories of the ancestral Co. Down farm of her grandmother who shared the family house and was a formative influence.

“My grandmother Mumsie (Elsie), grew up on a farm outside Newry, the second eldest of nine girls. She had been a school teacher in Glenariff, Co Antrim from 1913 to 1923. Of that time of war, we knew that her cousin had been shot dead at her family home in Newry in 1921, but when Elsie passed away in 1978 a mass card of a young man dating from June 1922 was found. My mother discovered that he had been her fiancé, killed by the Special Police in an IRA action. Elsie was introduced to my grandfather soon after and moved to Dublin. His family had been neighbours in Co Down who had set up business as timber merchants in the Liberties a generation before. She loved the sea, and moved the family to Sandycove from the inner city in the mid 30’s.

We often returned North in Summer, crossing the border to spend time at the farmhouse where Elsie’s sister Mena still lived and to visit relatives in farms nearby. I remember the beautiful orchard and garden with Hydrangeas out front and views towards the Mourne and Cooley mountains. Our visits ceased at the height of the troubles in the 70’s. In the 80’s, following the death of my great aunt, the farm was sold to a second cousin.

After a family funeral in early 2015, I and my brother Peter, a filmmaker, visited the farm for the first time since childhood. Memories and wonderings were triggered – not just of our own childhood Summers, but of the lives lived there: our grandmother, her sisters, parents and when our mother visited as a child every summer with her brothers and sisters.

Returning in winter 2015 we set about making a short film