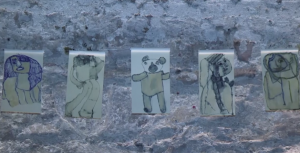 Cork City Council Arts office, Crawford Art Gallery and CIT Crawford College of Art and Design are building on the success of their 2013 Art of Inclusion exhibition. The artwork in Perceptions 2016: The Art of Citizenship has been selected from worldwide submissions from artists working in supported studios – spaces offering opportunities to artists who may previously have been unable to develop their arts practice whether from a physical lack of access to materials, lack of opportunity or because of limited expectations of them.

This exhibition will also showcase outcomes of the Expanding Realities project, a European Erasmus + funded partnership. Over the past 2 years, three supported studio groups – GASP Cork, Art in Motion (AIM) Bristol and Debajo del Sombrero Madrid – have developed and exchanged approaches to engaging the creativity, and supporting the professional development of artists who have much to contribute, but face barriers in society and in the world of art.