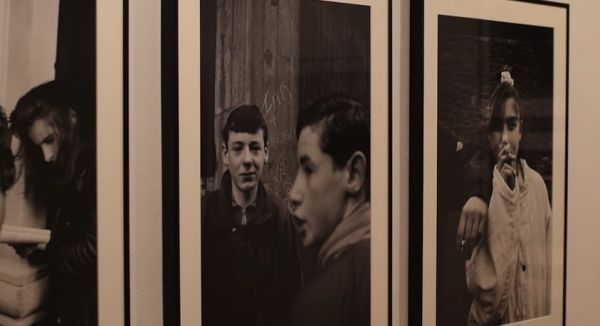 Danish artist Krass Clement’s photographic work emerges from two traditions: Scandinavian melancholy and the ‘flaneur’ tradition from the Parisian school. Clement’s work is concerned with reflecting interior states of mind rather than with documenting real life situations. His dark, stripped-back aesthetic combines with a stream of consciousness approach to evoke introspective, psychological landscapes that sit somewhere between fiction and reality.

Drum was photographed over a single evening in a small pub in Drum, County Monaghan. With only a few rolls of film (and a rumored five pints of Guinness), Clement created one of the most important contributions to the international canon of contemporary photo books. Through subtle shifts in focus and masterful filmic sequencing, the book comes to concentrate on one principal character in the shadowy pub: a hunched, weather-beaten man sitting alone with his drink. The work is a quiet meditation on community, the outsider, alienation and the terrors of being alone.

The exhibition also includes the world premiere of work made in Dublin in 1991. It continues Clement’s concern with the exploration of place as a reflection of the inner psyche, presenting a view of Dublin at odds with itself. The lively theatre of street life contrasts with melancholic, empty streetscapes. Both bodies of work were made during a visit to Ireland by Clement as part of a residency at the Tyrone Guthrie Centre in Annamakerrig, County Monaghan.

A new book by Krass Clement, Dublin, has been published by RRB Photobooks to coincide with the exhibition. It is available in the Gallery Bookshop at a special exhibition price of €45.
Exhibition continues until January 22 2018.

About the artist: Krass Clement (b 1946) lives and works in Copenhagen. A self-taught photographer, he graduated as a film director from the Danish Film School in 1973, though continued with photography which he had practiced since his early youth. His first book, Skygger af Øjeblikke (Shadows of Moments) appeared in 1978, and since then he has continued to create a strong personal body of work with the photobook as his favorite medium. His work is in many public and private collections, including The National Photomuseum of the Royal Library of Denmark; The Bibliothèque Nationale, Paris; and the Museum of Modern Art, New York.