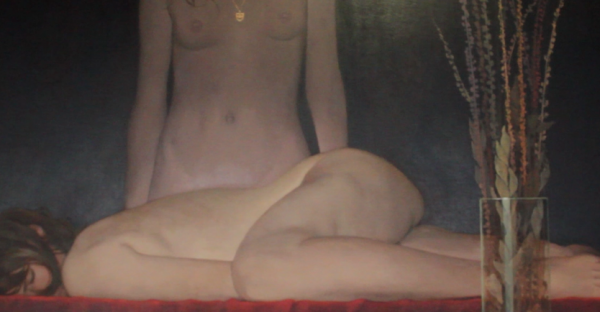 Tony Kew was born in Johannesburg, South Africa in 1937, where he studied in the Johannesburg School of Art. In 1967 he immigrated to Toronto, Canada when he was thirty years old. During his career in commercial art in Toronto and New York he received over thirty awards of merit and creativity. He began painting seriously in 1974. Almost ten years later, in 1983 he was chosen to design images for Canada Post and for Canadian Embassies throughout the world. He now lives in Aughrim, Co. Wicklow.

Tony is a painter with a preoccupation with the human form and in the realistic and surrealistic genre. His work has sold in eleven countries: Ireland, USA, Bermuda, Canada, South Africa, Spain, England, Belgium, Holland, Germany and Italy. Tony’s work is represented in several corporate collections; collected Imperial Oil of Canada and Texaco Canada Inc as well as numerous others. His paintings have been seen on RTE on television programmes such as the Angelus, Time Out and IRIS. His portraiture has won awards.