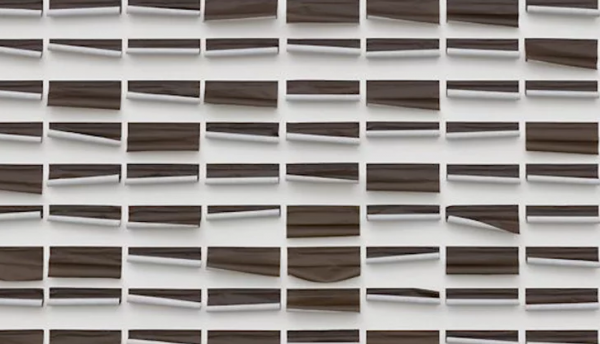 IMMA has announced its programme for 2017. The full details of it can be seen on imma.ie.

The announcement was followed a talk given by Brazilian artist Jac Leirner, of her exhibition “Institutional Ghost” which runs from 14th February to 5th June. She uses utilitarian everyday objects such as rulers, spirit levels and electrical cable to create art. She also finds purpose for small objects which have performed their allotted task such as airline luggage tags or fragile objects of brief use such as cigarette rolling papers. She has represented her country at the Venice Biennale and at Documenta Kassel. The exhibition is site specific to the Courtyard Galleries, East Ground.

From 13th April to 27th August an exhibition in the Main Galleries and on its extensive site will take place entitled “As Above, So Below”. It considers “the role played by certain spiritualist and alternative doctrines in the creation of abstract painting from its origins to the present digital age”. It will cover over 100 years from works by Kandinsky to contemporary works by Steve McQueen and Bruce Naumann with a vast array of artists in between. “Transcending the limitations of what is perceived as spiritual this exhibition embraces the occult, the otherworld, human consciousness, mysticism and ritual, creating a space to reflect and explores these gateways to wonder.”

On 16th June there opens “Sweet Blood Cell” an exhibition by Nan Goldin. It is the first solo exhibition by her at IMMA and will present pivotal works from her intensely personal, spontaneous, sexual and transgressive photographs. Intriguingly it will also contain previously unseen work by her from Ireland. This exhibition continues until 15th October.

Appropriately coinciding with the Nan Goldin show is a solo exhibition by Irish artist Vivienne Dick entitled “93% Stardust”. She is an internationally celebrated film maker and artist who lived and worked in New York in the late seventies and early eighties. Dick’s work formed part of two major retrospectives of American avant garde film: No Wave Cinema 1978-87 (1996) at the Whitney Museum, New York and Big as Life: An American History of Super8 Film (1999) at the Museum of Modern Art, New York and the Philadelphia Museum of Art. Her work was the subject of a retrospective at the Crawford Arts Centre in 2009, with an accompanying monograph co-published by the Crawford Arts Centre and the LUX Tate Modern, London in late 2010. Her time in New York overlapped with Goldin with whom she is friendly.

Meanwhile the current manifestation of the Freud Project continues until October 2017. The exhibition consists of a selection of 30 of the artist’s paintings and 20 works on paper. If not visited already, it should not be missed. October is not that far away!

These are some of the highlights. Throughout the year Imma has an extensive programme of talks, lectures, workshops, happenings and events. The website gives the details.