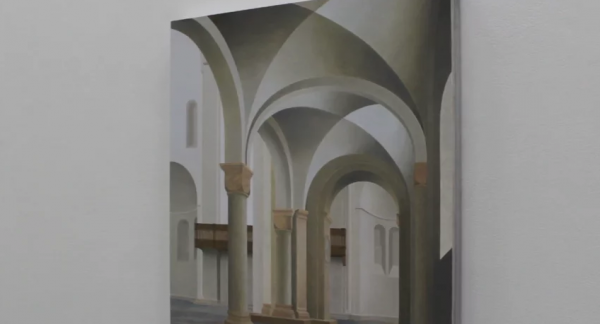 Kerlin Gallery is pleased to present Faith After Saenredam and Other Paintings, an exhibition of new paintings and works on paper by Paul Winstanley. The exhibition will open with a reception in the company of the artist on Friday 19 May.

In this exhibition, Winstanley reimagines lost paintings and drawings by the Dutch Golden Age artist Pieter Saenredam (1597–1665). Best-known for his depictions of whitewashed church interiors, Saenredam captured the restrained character of Dutch Reformation architecture and popularised a new style of realism in the 17th Century. His reverence for serene, deserted interiors, precise use of perspective and muted tones find an echo in Winstanley’s work, which has depicted similarly ascetic spaces in the past: British art schools during summer break, vacant walkways, veiled windows and empty TV lounges.

Winstanley began this body of work with Lost (After Saenredam), which recreates a missing Saenredam painting of Utrecht’s Mariakerk (1647) from a surviving, and technically accurate, preparatory sketch (1642). In a second work, Faith (After Saenredam), the artist shifts the viewpoint slightly to include a window and golden tapestry known to have existed in the church, rendering the tapestry in gold leaf. Made to the same dimensions, and using the same source material, the differences between these two paintings underscore the ambiguities implicit in reimagining such works.

This examination of pictures and picturing, of authorship and technical means, continues throughout the exhibition. Apostasy (Drift) and Apostasy (Enrapture) depict viewers, en masse, moving and stationary before semi-anonymous religious icon paintings in London’s National Gallery. In another work, a couple share a moment, gazing at a Vermeer painting. These paintings within paintings, also rendered with gold leaf, glow with an otherworldly light amongst the prosaic reality of the depicted museums. Each meditates on the act of looking: at the ‘fictional’ and the ‘real’; the ‘original’ and the ‘quoted’. Despite this layering and dismantling of authorship, Winstanley’s intention and expression is fully evident in this body of work.