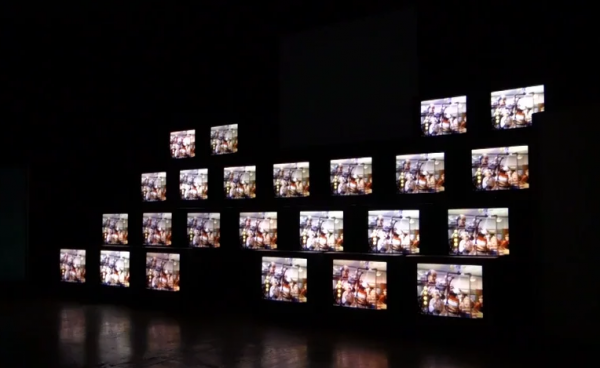 A monumental 24-monitor multi-projection screen installation, Total Recall explores the accelerated image-flow of television and includes a multitude of images that surrounded the context of her work – corporate logos, military hardware, Hollywood film as well as commercials for consumer goods.

Total Recall launches itself on our senses. It hits us in the eyes, the memory, the ears, the body, and our index of meaning – the part of us that recognises a corporate logo, a scene from a film or a title, and then wrenches to mind its associations. Careening across the numerous screens and television box-sets, images and sound are edited to participate in the making of a symphony – the performance and now installation of what Gretchen Bender called ‘electronic theatre’.

Through this single seminal work of art, we can feel the power of an extraordinary artist, who Hal Foster calls an ‘oxymoron: a feminist futurist’. Bender ricochets between cinema samples and graphic symbols, advertisements and her own footage, and zooms in repeatedly to examples of military propaganda and corporate self-representation. The concept of electronic theatre couldn’t be more apt, with its dynamic rhythm, waxing and waning tempo and crescendo of intensity.

Installed in the gallery of Project Arts Centre (also a natural home of theatre and performance), Total Recall has prompted the commissioning of a new work by artist Oisín Byrne. The printed and painted curtain is designed as a graphic entrance to Bender’s theatre – its thick and layered fabric protecting and containing the audio visual environment. Oisín Byrne has drawn from a variety of image sources, including TV static and TV test cards, and worked them into a combination of optical patterns and manual gestures. Static, the image a TV displays before, after or in the absence of a programme or signal, is particularly poignant in an era when television programming and broadcasting is all but over.

The image of static also raises complexity for the care and archiving of Gretchen Bender’s wider body of work, some of which included the live feed of televisual transmission. Developing from previous artworks that also function as exhibition furniture, performance stages, and lecture interventions, Oisín Byrne’s entrance curtain brings an artist of the current generation into dialogue with an artist whose influence continues to grow after her death.