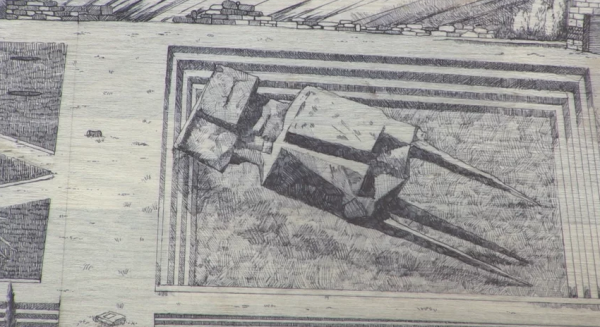 Parc du Souvenir comprises a new body of work by this Cork based artist that attempts to give form to both an interrelated and seemingly incongruous nebula of ideas and interests: from modern European history, Enlightenment philosophy, expressions of ideology in the rural and urban environment in the form of architecture and monuments, the Northern Romantic Landscape tradition, Dada and Constructivist collage, to the idea of affliction and wrongness as a relevant alternative aesthetic to classical notions of beauty.

The original impetus for this work came as a result of reading Cities in Evolution by the radical Scottish sociologist and city planner Patrick Geddes, closely followed by Gűnter Grass’s The Tin Drum.

The differences between these individuals could not be more profound. Geddes, very much symptomatic of the Victorian cultures of empire and philanthropy, though equally and conversely non-conformist, was drawn to the improvement of civic wellbeing through ideas born from a foundation in botanical study. Grass, adversely, witnessed the utter destruction of his bipartite birthplace, the Free City of Danzig, now Gdańsk, once a great and important Hanseatic port, part Polish, part Prussian, firstly under Nazism and later through Soviet invasion.

Geddes the scientist was also a dreamer drawn to mysticism. Grass the fabulist and satirist, a pragmatic socialist, instrumental in the reformation of German post-war politics. Both made remarkable achievements, and both suffered the consequences of historical circumstance at varying points in their lives.

There is no cohesive thesis to be sought here, no tidy packaging of contents. What is aimed for is a particular sentiment, one that sits between the endeavours of human ambition and its recurrent failures in a balanced mixture of poignancy and humour.