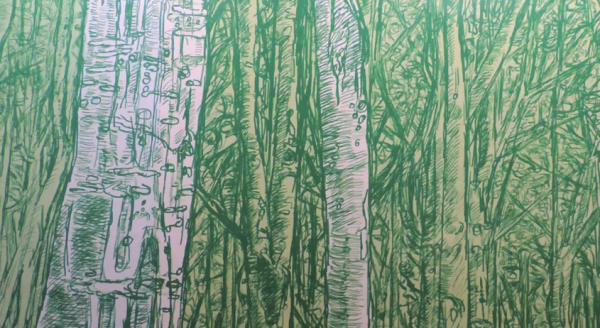 John Coyle will be showing a series of small scale oil painting’s, most of which have been made in the recent past, painting his every day life and environment, the view from his window, the park outside his house, or figures in his studio, continuing what he has been doing for the past sixty or so years. He was elected an Associate Member of the Royal Hibernian Academy in 1979 and a full Member in 1982. His art education was gained at the National College of Art & Design in Dublin and the Glasgow School of Art. He also studied in Paris, Florence and Madrid.

Gary Coyle is picking up where he left off with his previous 2015 show Into The Woods, at The RHA Dublin, again he will be exhibiting a series of large scale charcoal drawings, many of which incorporate elaborate hand drawn frames. Against the background of a large scale, gallery sized colour drawing of a forest made with a digital tablet. The charcoal drawings will explore a variety of subject matter & themes, including the gothic- though given a contemporary reworking- appropriated imagery from the internet, the function of the frame, nature versus culture,

*Now came still evening on; and twilight gray
Had in her sober livery all things clad:
Silence accompanied; for beast and bird,
They to their grassy couch, these to their nests,
Were slunk, all but the wakeful nightingale.
John Milton, Paradise Lost (1667; 1674), Book IV, line 598.