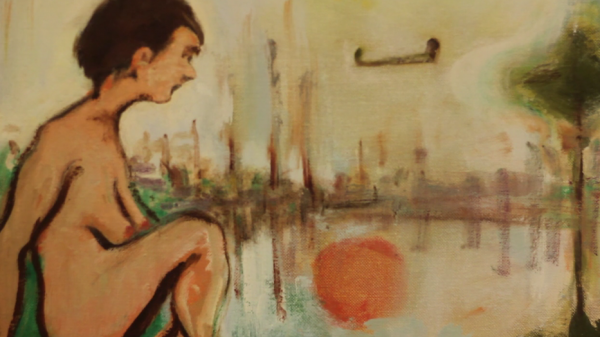 Verne Dawson’s paintings typically display a preoccupation with history, collective memory and the measurement of time; he is fascinated by the attempts humanity has made to comprehend the mystery of our place on earth and to pass on inherited understanding to later generations. A deep interest in prehistoric art, ritual, fairytales and superstition makes its way into his work, which is often influenced by the mathematical and astronomical grounding of folklore, calendars and astrology.

The small group of paintings in Gallery 2 reveals a different facet of Verne Dawson’s style. Selected by the artist in relation to the work of Bill Lynch, whose Gallery 1 exhibition he curated, the five pictures are more obviously figurative and gestural than usual, while remaining just as mysterious and enigmatic as his more familiar narrative landscapes. They include an early portrait of Lynch.

Verne Dawson’s ‘432’ took place in 2004 in Gallery 1 at the Douglas Hyde Gallery. His work was also represented in the group exhibition ‘Huts’ later that year, and in 2008 he showed in Gallery 2, in the ‘Paradise’ series. He has exhibited widely around the world, most recently in solo exhibitions at Eva Presenhuber, Zürich, Victoria Miro, London, and Gavin Brown’s enterprise, New York.