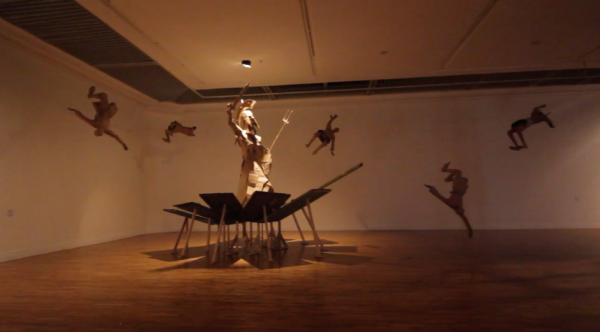 Mick O’Dea PRHA is known for his paintings of the War of Independence, images culled from found and researched photographs. The very act of painting and enlarging figures from the past redeems them from the chill of photographic documentation recalling them as living breathing subjects. The fact that he extended that exercise to both sides of that war points to the complications that history now holds as we move away from the ideology of the nation state. O’Dea was stimulated by his childhood experience of the 50th anniversary of the Rising in 1966, to have a life long interest in Irish history and spurring him on, as an adult artist, to re-imagine and re-create events from that era.

Mick O’Dea has decided to embrace the events of that Easter weekend in four monumental canvases sited in the vicinity of central Dublin – the GPO, Upper O’Connell Street, the RHA on Middle Abbey Street and College Green. His large writ images offer both details and approximations, accuracy and ambiguity. O’Dea, who also trained as a sculptor, for the first time in twenty years adds three dimensional elements to his exhibition. Funky and figurative, these objects have a potency that rises above the abject materials of their making and comments on matters of monumentality, history and humanity.

The artist is introducing a further risk to the exhibition by opting for a theatrical presentation of the work. The stark spots and dark shadows amplifying our oscillating comprehension of historic events as they are but through the alembic of recollection, recreation and revisionism. The exhibition will be accompanied by a fully illustrated catalogue with an essay by Trinity historian Ciaran O’Neill, co-published with Ballina Arts Centre and Mayo County County Council. A version of the exhibition will be shown in Ballinglen Art Foundation, Ballycastle and Ballina Arts Centre in late July and August 2016.