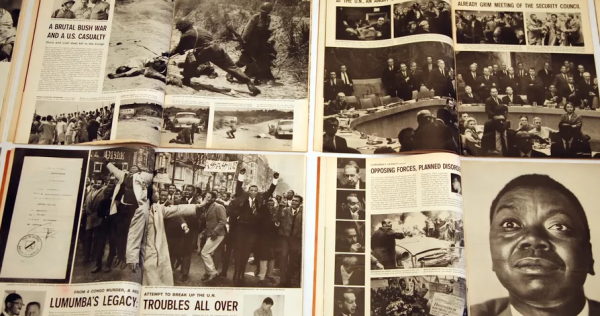 During the Cold War the FAL rifle was the most distributed weapon in non communist countries, and therefore named the “right arm of the free world”. However the rifle appeared on both sides of the ideological spectrum and was depicted in the various conflicts around the world as reported by the famous Paris Match and LIFE magazines.

The Metronome Bursts of Automatic Fire… is a new storyboard installation by Belgian artist Sven Augustijnen for The Hugh Lane’s Artist as Witness 2016 exhibition programme. It is an allusion to the light automatic rifle – the F.A.L manufactured by Fabrique Nationale de Herstal, in Belgium. The installation consists of a display of TIME and LIFE magazines and RTÉ archival material that evokes how both weapons and journalism have been entangled in the fabric of our histories.

In Sven Augustijnen’s work the traditional codes of documentary practice seem to be both expanded and undermined. Debate and dialogue, as vehicles for embodied social memory and symbolic experience, play a key role in his practice. Fictions, rumours, personal comments and vague remarks are all inseparable from the forms of living memory.