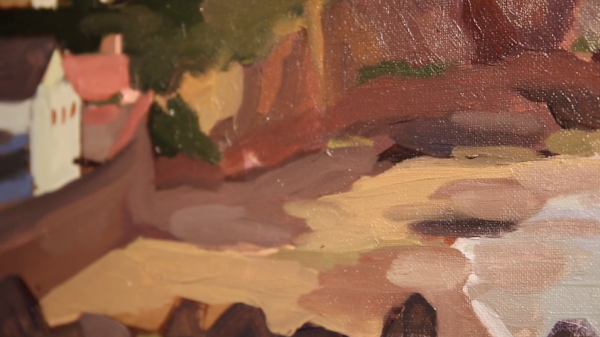 Jonathan recently returned to Waterford from Florence, Italy where he studied full time at the Florence Academy of Art since 2013. Prior to that Jonathan attended Waterford Institute of Technology where he graduated with a degree in Architecture in 2013.

At the Florence Academy, there is a strong emphasis on drawing and particularly drawing the human figure as a means to gaining skill in painting and sculpture. Several of Jonathan’s academic drawing exercises will be on show at the exhibition displaying his development during his time in Florence. This is a route taken by other prominent Irish artists, notably Peter Curling, Fergus Ryan and the renowned sculptor Paddy Campbell.

This exhibition follows Jonatha­­­­n’s journey as he searches for his preferred medium and subject matter. There are examples of pencil, charcoal and graphite drawings of human figures and portraits. Watercolours and ink and wash paintings explore the immediacy of this medium as he captures urban and landscape scenes in Florence, Ischia, Croatia and Dunmore East.

Whereas the academic method is confined to the studio and a controlled light source his oil paintings are all painted en plein air as he strives to capture the play of light on landscape forms. He refuses to paint from photographs preferring to battle the elements for the spontaneous image.

The cliffs on the coast of Dunmore East have provided wonderful inspiration as they are constantly changing with the light and are the subject matter of many of his paintings. More recently the autumnal colours of trees in the landscape and the play of light have created fascinating subject matter which he has attempted to capture in both watercolours and oils, the former often providing the initial study for the latter.