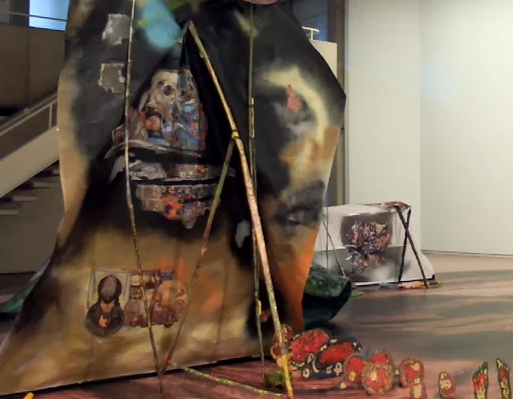 The Old Croghan Man is one of a number of 2,000 year old ‘bog bodies’ unearthed from Irish wetlands in recent years. His remains, which comprise only the upper torso and arms, have been extensively analysed through a variety of tests, scans and forensic examinations to help build a picture of his life and his demise. He was likely the victim of a human sacrifice known as the ‘threefold death’, a violent ritual suffered by Celtic kings who failed to appease their subjects. His body was then deposited in a bog lake where the soft-tissue was compressed, tanned and preserved by the biochemical composition of the environment. The compacted remains are now on display in the National Museum of Ireland.

The Old Croghan Man is also crucial to Sam Keogh’s new installation. A photograph of the flattened figure is reproduced at a large scale on the Gallery floor. The folds of leathery skin are lifted and propped open by sculptures, casts and found objects to reveal collages of a multitude of images from a broad range of sources: André Masson’s Acéphale illustration depicts a headless monster, functioning as a parodic diagram of the ideas of the Surrealist philosopher Georges Bataille; Krang, the villain from Teenage Mutant Ninja Turtles, is an anthropomorphic brain housed in the torso of a human-shaped exo-suit; the cryogenically-frozen body of John Spartan from the film, Demolition Man; and a snapshot of the artist’s mother, apparently perturbed by a ‘virtual autopsy display’ of a mummy in the British Museum.

Abjection, preservation and the link between violence and representation are central themes in this exhibition. However, the permanence of an enduring artwork is contradicted by Keogh’s use of crude materials and demotic craftsmanship. A grubby charm seeps through much of the artist’s work as he exhumes links between disparate fragments of internet memes, childhood obsessions and critical theory, which clash to form an aggregate of references from high, low, sub and popular cultures.

Four Fold is on at the Douglas Hyde Gallery, Dublin, until the 22nd July 2015.