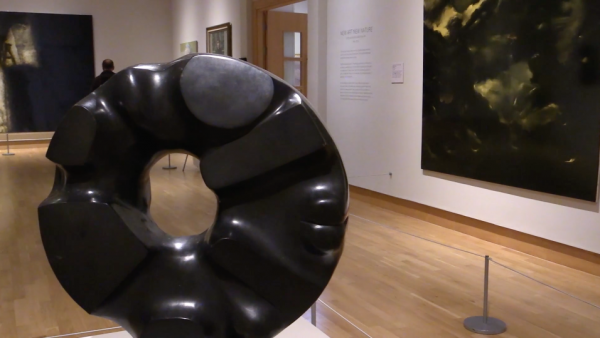 The display begins with the Oceania textiles (1946) made by Matisse at the end of his career, when illness prevented him from painting. The ‘cut-out’ forms are designed to give a sense of the limitless freedom, lightness and space he had experienced when swimming in the South Seas in 1930. Matisse referred to ‘the irrepressibility of nature’ and this theme was taken up by William Scott in The Four Seasons Mural, (1959-62) for Altnagelvin Hospital, in which he translated the cyclical rhythms of the seasons into a highly accomplished abstract composition.

Nature as a potent, even overpowering, force is alluded to in Segura (2010), a video installation by Willie Doherty made in the Murcia region of southern Spain. The exhibition closes with two new acquisitions by Tyrone artist William McKeown (1962-2011). Untitled (2008) (Art Fund Grant 2014) is a luminous, abstract evocation of the sense of joyousness the artist experienced when looking at a light drenched early morning sky. This poetic response and sense of reverie is also present in Waiting for the Corncrake (2008) a series of delicate, atmospheric watercolours presented to the Ulster Museum by the artist’s estate in memory of William McKeown’s important contribution to Irish art.